1) WHAT IS GEOTHERMAL ELECTRICITY?

Geothermal energy is recognised to be a safe, reliable, environmentally benign energy, which produces renewable energy resources to generate electricity and/or heating and cooling while producing very low levels of greenhouse-gas (GHG) emissions. 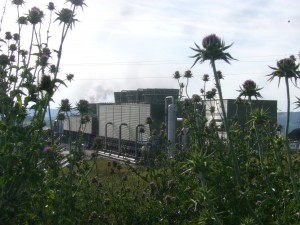 As underlined in by the authors of the IPCC report (2010):

‘The natural replenishment of heat from earth processes and modern reservoir management techniques enable the sustainable use of geothermal energy as a low-emission, renewable resource. With appropriate resource management, the tapped heat from an active reservoir is continuously restored by natural heat production, conduction and convection from surrounding hotter regions, and the extracted geothermal fluids are replenished by natural recharge and by injection of the depleted (cooled) fluids.’

At present, geothermal production of heat and power is on-going in a number of geological environments where the temperatures and depths of the reservoirs vary accordingly. Many high-temperature (>180°C) hydrothermal systems are associated with recent volcanic activity and are found near plate tectonic boundaries, or at crustal and mantle hot spot anomalies. Intermediate- (100 to 180°C) and low-temperature (<100°C) systems are also found in continental settings with or without (in case of Enhanced Geothermal Systems: EGS) hydrothermal resources. Under appropriate conditions, high-, intermediate and low-temperature geothermal fields can be exploited for both power generation and the direct use of heat.

2) HOW IS ELECTRICITY PRODUCED FROM GEOTHERMAL HEAT?

There are two commonly used processes when creating electricity from geothermal sources. The first, conventional geothermal: flash or dry steam, is generally associated with higher temperature geothermal sources (>180°C). As the pressure of the subsurface environment is much greater than at the Earth’s surface, water can exist as a liquid/steam at very high temperatures.

Flash: The high temperature, high pressure water is brought to surface, where it is enters a low pressure chamber and ‘flashes’ into steam. The pressure created by this steam is channelled through a turbine, which spins to generate electrical power. Once the steam has exited the turbine, it is either released into the atmosphere as water vapour, or it cools back into liquid water and is injected back underground.

Dry Steam: dry steam power plants utilise straight-forwardly steam which is piped from production wells to the plant, then directed 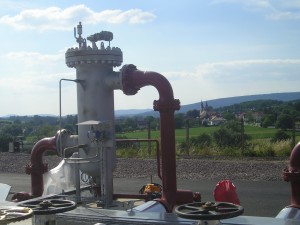 towards turbine blades. Conventional drysteam turbines require fluids of at least 150°C and are available with either atmospheric (backpressure) or condensing exhausts.

The second common method, binary geothermal: Kalina or Organic Rankine Cycle: ORC, is common with lower temperature geothermal resources. It operates on the same principle that when a liquid is heated into a vapour, the resulting pressure can drive a turbine. However, because the temperatures are often too low to ‘flash’ water in a binary system, the heat of water must be transferred to a separate liquid with a lower boiling temperature. The separate liquid is called a ‘working fluid’. When the hot geothermal water is brought to surface from deep underground, it is run through a ‘heat exchanger’ which transfers the heat from the geothermal water to the liquid working fluid. Because the working fluid boils at a low temperature, it vaporizes readily with less geothermal heat, and this vaporization produces enough pressure to drive a turbine. What makes a binary system unique is that it operates as a 2 closed-loops (hence, binary); neither the geothermal water nor the working fluid are exposed to the surface environment. All the water that is brought to surface is re-injected, and after vaporizing, the working fluid is cooled to its liquid state, so it may repeat the process. There are no-emissions in the binary geothermal cycle.

So far, geothermal technology development has focused on extracting naturally heated steam or hot water from natural hydrothermal reservoirs, and these technological systems for geothermal electricity production can be subdivided in three large categories, which are also linked to the temperature ranges: 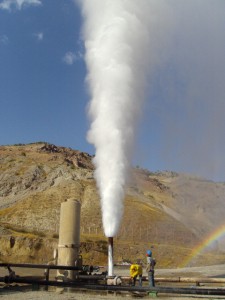 1) 80°C<T<180°C (Medium Enthalpy resources): this range of temperature is appropriate for use with binary plants (Organic Rankine or Kalina cycle), with typical power in the range 0.1-10 MWe. These systems are also suitable for heat & power co-generation, typically for single edifice to small towns heating.

2) 180°C-390°C (High Enthalpy resources): temperatures in this range can be exploited with dry steam, flash and hybrid plants, with typical power in the range 10-100 MWe. These systems, characterised by high efficiency up to more than 40%, also allow heat cogeneration for large towns’ district heating. Above 200°C, these resources are generally limited to volcanic areas.

However, geothermal energy has the potential to make a more significant contribution on a global scale through the development of the advanced technologies, especially the exploiting of hot rock resources using enhanced geothermal systems (EGS) techniques that would enable energy recovery from a much larger fraction of the accessible thermal energy in the Earth’s crust.

A total of circa 530 geothermal units all over the world were reported online in 2010. The maximum addresses 236 binary plants; totalling an 1178 MWe installed capacity (i.e. a unit 5 MWe plant load). The sizes of flash and dry steam plants average 31 MWe and 44 MWe respectively. In the EU, the total installed capacity is ca. 935 MWe, generating about 7 TWh in 2012. Main production comes from conventional geothermal systems in Italy. Recently, binary power has been produced in Austria and Germany from low temperature geothermal sources and in France and Germany from EGS.

In 2012 there was an installed capacity of 1714.67 MWe in Europe. (EGEC Geothermal Market Report 2012). At present there are 73 projects being planned in Europe, which would increase the total installed capacity to a total of 3 GWe in 2016. In addition, 98 projects are now being explored, representing an additional capacity of around 1 GWe. Many of them are binary and / or EGS projects.

Italy dominates the market with more than 50% of the European capacity, i.e 882 MWe. After the liberalization of the Italian electric market more than 120 applications for Research Permits finalised to geothermal exploration and exploitation have been presented in the last couple of years. Iceland has installed 7 power plants representing a capacity of 662 MWe.  Nearly 300 MWe are currently being developed with 5 new projects. Turkey is a booming market with the installed capacity that should grow from 114 MWe today (7 plants) to nearly 1 GWe by 2016 with more than 50 projects under development. Geothermal power plants are also installed in France (Guadeloupe) and Portugal (Açores) since the 1980s. France is also the country where the first EGS pilot project (Soultz) was inaugurated in 2008 and where at least 12 other EGS projects are being investigated.

But geothermal electricity is developing beyond traditional geothermal countries. An important new entrant is Germany, where there are 5 plants in operation representing a capacity of 12 MWe. In addition, 16 plants are under development and 20 under investigation.  Greece is another relevant newcomer in the geothermal electricity market with 13 projects being investigated, mainly on the Greek islands.

Finally, 7 EGS are being developed and 37 EGS projects are being investigated in other European countries. 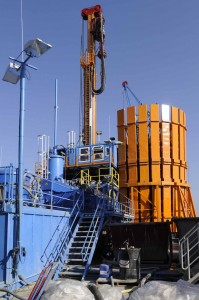 As a renewable source of energy, geothermal is widely regarded as having major advantages over other energy sources in relation to climate impact and reliability.

The IEA underlined this point in its Geothermal Technology Roadmap:

‘Geothermal typically provides base-load generation, since it is generally immune from weather effects and does not show seasonal variation. Capacity factors of new geothermal power plants can reach 95%. The base-load characteristic of geothermal power distinguishes it from several other renewable technologies that produce variable power.’ (2011).

‘several significant characteristics that make it suitable for climate change mitigation. These include: global-wide distribution; indigenous resource; production independent of season; immune from weather effects and climate change impacts; effective for on and off grid developments and for provision of base-load power. In off-peak periods this base-load generation can also be used to recharge battery-powered vehicles, helping to mitigate CO2 emissions from fossil-fuelled transportation.’

Environmental and social impacts from geothermal use are site and technology specific and largely manageable. Overall, geothermal technologies are environmentally advantageous because there is no combustion process emitting carbon dioxide (CO2), with the only direct emissions coming from the underground fluids in the reservoir. Direct CO2 emissions for direct use applications are negligible and EGS power plants are likely to be designed with zero direct emissions. 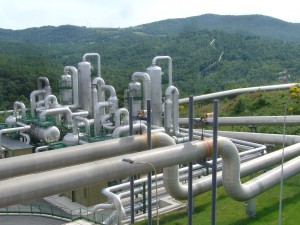 Concerns on the consequences of exploiting geothermal resources have been cited at the local level, where natural phenomena, such as micro-earthquakes, may be influenced by the operation of geothermal fields. Induced seismic events have not been large enough to lead to human injury or relevant property damage, and proper management of this issue is a key factor in project development for EGS.

There are significant other benefits to be identified in terms of geothermal development. One particular benefit its local job creation, during the whole lifespan of a project.

The GEOELEC project is actively working to increase geothermal electricity generation in Europe, with the objective to double installed geothermal power capacity in Europe from 11 TWh per year in 2010 generated mainly in Italy and Iceland, to 22 TWh per year in the short/medium term and initiate new projects in every EU member state leading to 55 TWh per year by 2020. GEOELEC will also result in setting concrete actions to reach these objectives: conditions for financial feasibility, a regulatory framework, and public acceptance.

In electricity applications, the commercialization and use of EGS may play a central role in establishing the size of the contribution of geothermal energy to long term GHG emissions reductions.

In short, the future looks strong for increasing geothermal electricity production, and with the right tools and continued efforts to break down barriers, the process can be accelerated to make the best use of this dynamic resource.

All photos are copyright of EGEC unless otherwise stated.